Paris breaking NEWS September 24, 2011: Tsunami poet will be executed today at the LouvreMuseum as part of a “Tribute” to capital punishment – he will be reading a Last Poem followed by a series of last wishes before being beheaded!

HEADS WILL ROCK n ROLL! poets are going out right now to storm streets, museums, GUILLOTINES, gardens & bridges, followed by a gang of cats of all pedigrees!! A poet’s head will roll down thru Paris like a blazing ball of fire, a dancing COMET, to sing the Poem – Hey world, let’s rock & JazZ! 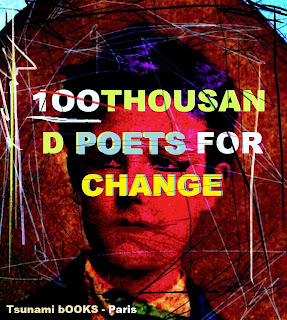 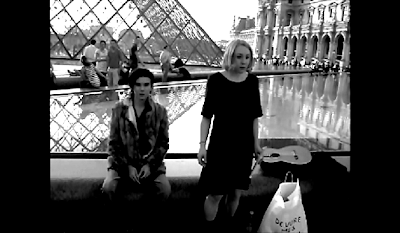 … Actually, the Unpredictable absolutely ruled our 100TPC event here in Paris: a poet was guillotined at the Louvre in broad daylight while his siamese entity danced tango with him, played the Pan flute & read his death sentence.

First, we stood right in front of the shopping gallery entrance ( Carrousel du Louvre, one of the most chic shopping centers in Paris ) on rue de Rivoli, holding a white shopping bag saying “BUY MY PAIN”, while making ironically dantesque from-daft-to-dandyish zany gestures, causing a mix of intrigue-soaked indifference, general bedazzlement & or panic among the visitors flocking in to the museum via the gallery arch. Next, we sat around the glass pyramid, where Elodie opened the scene for the poet’s beheading, the event of the year!, performing Leo Ferré “Monsieur William” tango on guitar, a ridiculously absurd story about a model citoyen ( employee of the month ) in his forties whose impeccably normal existence has never known the name ‘drama’, til one fine evening he goes out for a walk & finds a fair girl ( a hooker ) to whom he offers a bouquet of violets, & when they’re about to step into a seedy hotel room on no less infamous 13th Avenue, he is fatally stabbed in a fight with a black hustler who had just popped up to try to snatch the girl out of him ( see linocut-based video at the bottom of the page ).

Mr. William’s drama told, Elodie then started playing the Panpipe & finally announced the poet’s last words. The poet then “began to speak to them in parables”, paranoias, uttering a sequence of last wishes, among which a last “massage session” (shall we say!) with the Venus de Milo, Louvre’s official sugar baby, and a follow-up reading of his testament, a Poet’s Blood-written poem titled “Paris” ( dedicated to Baba Yaga,  François Villon, Jeanne Dark, Jean Genet, Monsieur William, Brigitte Fontaine, Béatrice Dalle & oh-oh, Carla Bruni ), before being beheaded at last by Elodie’s flute-guillotine, the September Indian summer blue sky reflecting on the glass pyramid which stands over the entrance to Napoleon’s court: that was when his head rockn’ rolled & bloomed!

Still hanging out around, we danced Butoh for the statues before we drained away to join other strangers & street musicians along the way ( like for ex., the piano outside of the Louvre, just off the métro station, along with a violinist & an old Han Shan riding a monocycle, or the jazz ensemble on the riverbank ); we kept waltzing up & down thru the streets to the crepuscular balconies of the Seine ( Pont des Arts, the wooden bridge over the Seine linking the Louvre to the Left Bank & part of Île de la Cité, the site where Paris was born ), reading from surrealist poetry & Beat big bangs to old French songs & even Braille, among passers-by, riverbank orchestras, picknickers, backpackers, beggars, kings & tramps.

So that’s it, our rootless events were above all marked/highlighted by the sublimely sparkling presence of Unpredictable Birds & “accidental” strangers, or as I see it, a Parkour Poètilique, which is part of my process of psychogeographical exploration of intensities, or sort of wandering aimlessly & getting lost hither & thither so as to capture the day’s pearl ( and why not life’s? ), dialoguing with street signs, unexpected correpondencies & amalgams, treasures, clandestine epiphanies, places, scenes, people, etc., thus recreating daily reality by intoxicating it with magic, transgression, urban impressionist mysticism, the city as a living temple itself, “Paris hallucinating carousel on fire”…

Having put our “event” through, we took a little pause on the Pont Neuf, and then walked up along the quai des Grands Augustins to Boulevard Saint-Michel, looking for a nice place to eat & drink. We had a plan. And what a plan. We picked one of the most expensive piano bar restaurants in the Quartier Latin, located on rue Galande, a cobblestone street at the junction of rue Saint Jacques ( where Villon spent his childhood & later in the 19th century haunted by Nerval, Baudelaire, Rimbaud & Verlaine ) with rue du Petit-Pont, sat at a corner table outside & ordered several drinks & aperos to the sound of an opera soprano performing a cabaret feature or something like coming from inside. After two or three hours revelling in such a garden of earthly delights, we saw that the old Chinese waiter, who was both slow & deaf, was rushing into the cabaret, so we took the chance to flow off, I mean slip away without paying bill, very discreetly til we reached the street corner & turned on the right, rue du Petit-Pont & boom, we broke into a gallop, for real, as cynically poetically pathetical as it may sound, to finally barge into the first safe spot to avoid being caught up. So we got holed up for about 40 minutes at The Who’s Bar, 13, two divine pints listening to good blues & rocknroll & calmly waiting for the drama outside to cool down, just in case…, till we finally left for another voyage au bout de la nuit ( this time the drinks were paid ), like two fever-crowned enfants terribles whistling Chet Baker “Let’s Get Lost” in the balmy air, burning up all Saturday night thrills, walking past the Notre-Dame and tripping on all those art-nouveau style street lamps of la Cité, blazing like wondrous hanging aquariums on fire, o la Cité, the craddle of Paris, on the night it was anonymously reinvented.

Wow, Monsieur William would surely have been so proud of us… Life is so short, so let’s live it up! Cabaret de la Pomme de Pin, here we go! 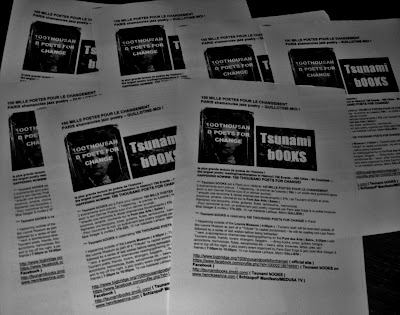 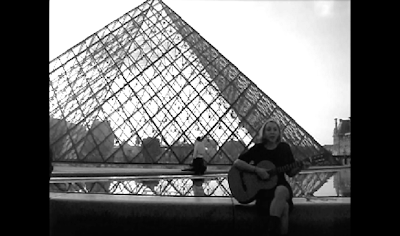 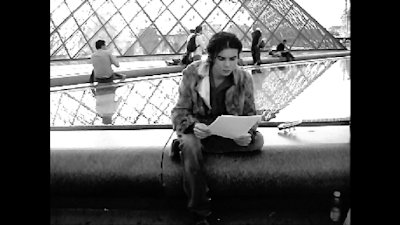 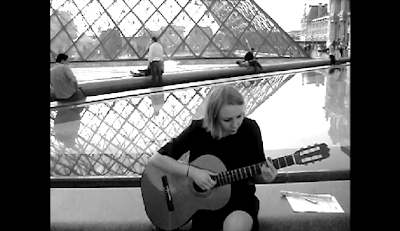 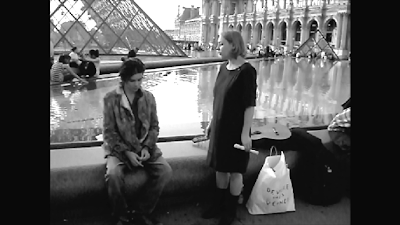 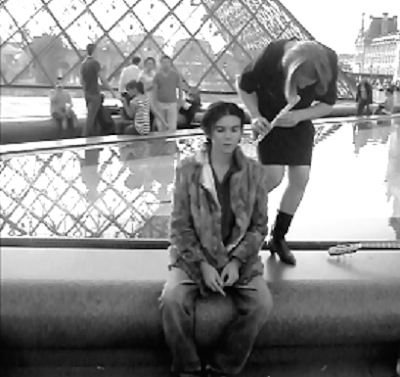 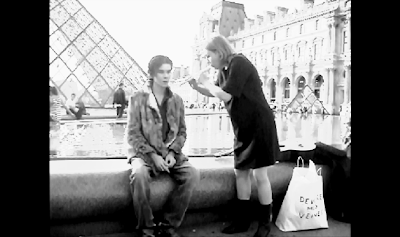 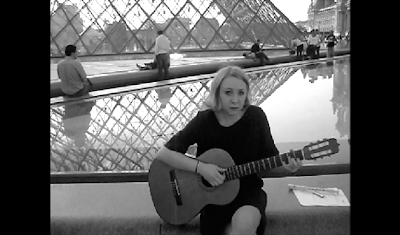 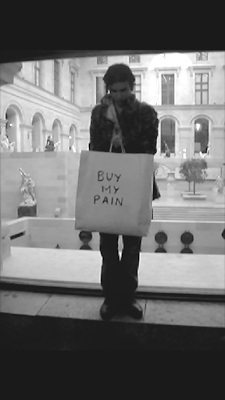 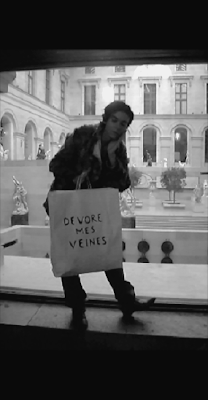 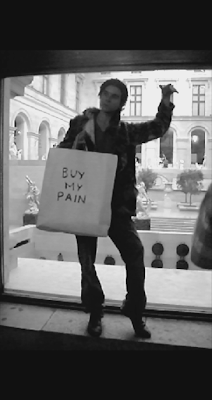 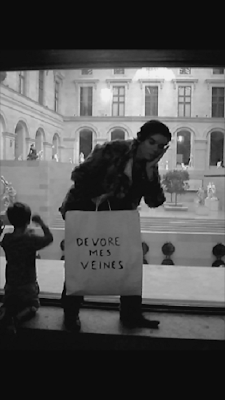 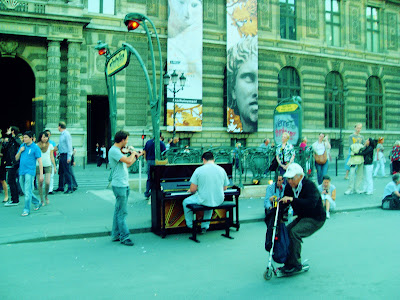 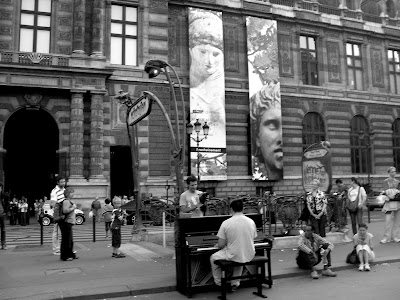 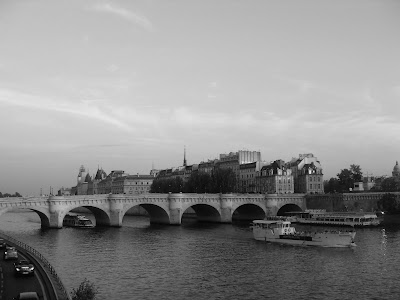 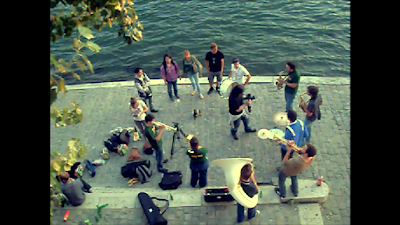 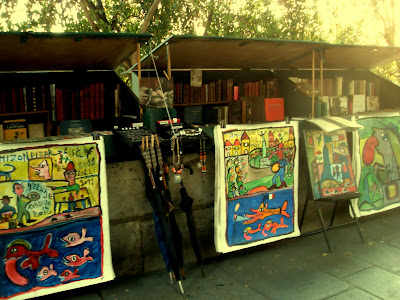 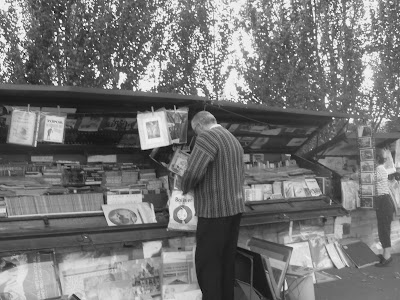 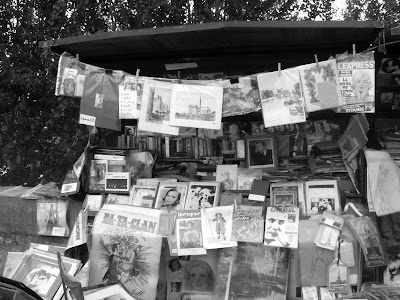 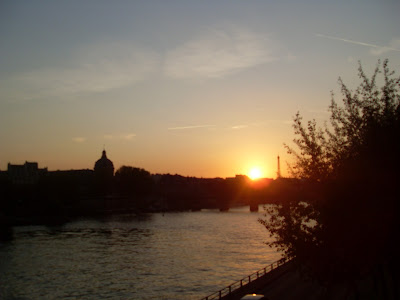 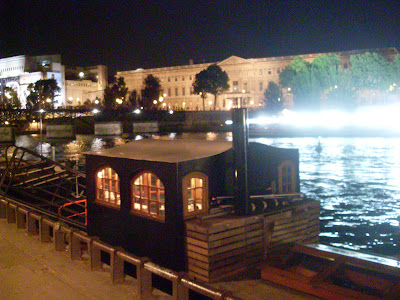 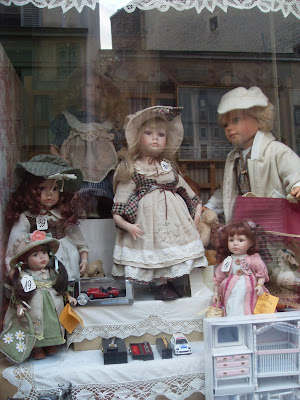 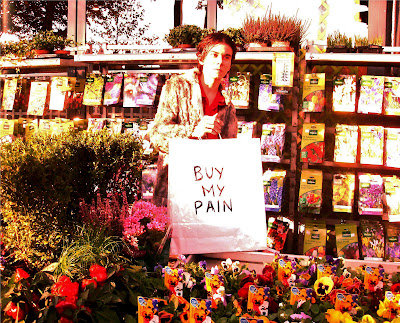 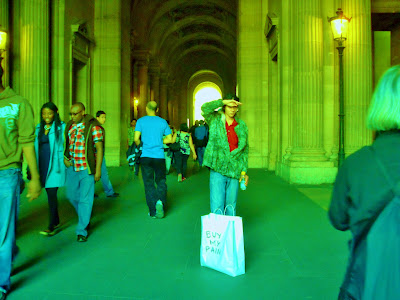 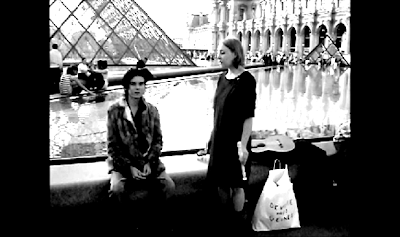 Henrik Aeshna lives amongst flowers, cats & visions in a rundown hotel in the heart of Montmartre, Khajuraho-Paris. Degenerate artist, explorer of intensities & translator, he’s the conspirator of outlaw poetry network Tsunami bOOKS & the creator of SchizoPoP Manifesto, a mix of shamanoise poetry, intravenous visual deliriums & sound/body painting. His poems & visual interventions have recently been published in Paris, London & in the US. His upcoming poetry book is titled The Absinthe Diaries, & his first solo exhibition is due to take place in Paris this Summer. He sees poetry as a Tjurunga key capable of reconnecting his blood, as well as his deepest being, to a more exuberantly dangerous & vaster realm of experiences. Dance, Ecstasy & Dreams. - Website : www.henrikaeshna.com
View all posts by Henrik Aeshna →
This entry was posted in Paris, France and tagged Elodie Noël, Henrik Aeshna, Tsunami Books France. Bookmark the permalink.